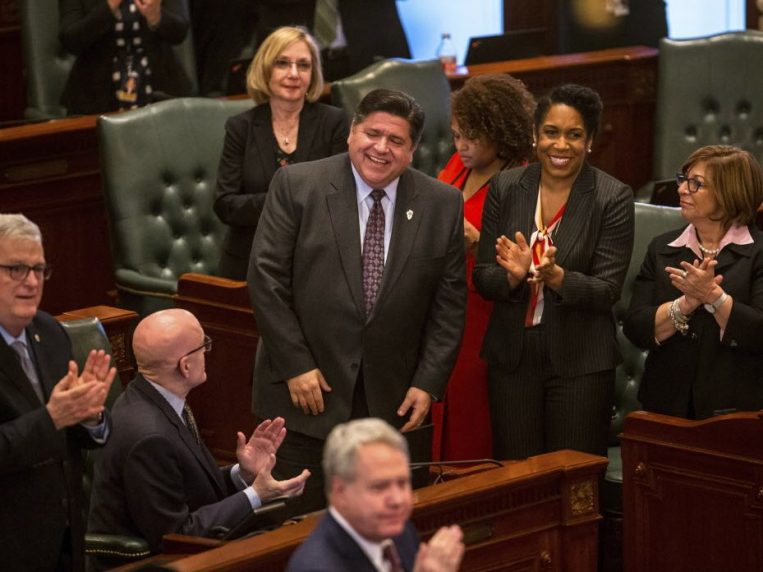 In his first budget address, Democratic Gov. J.B. Pritzker plans to pitch an “austere” spending blueprint with no increase in the state income tax rate, a bump in education funding and new revenue from business licenses he hopes the state will create to sell recreational marijuana.

Pritzker told the Chicago Sun-Times he will also push for taxes on e-cigarettes and vaping, and for the legalization of sports betting to help bring in more money for state government.

The governor also hopes to get a yet-unspecified amount of revenue from something that is not yet legal: recreational marijuana. The budget is “banking some revenues,” from legalizing marijuana, “but just from the selling of the licenses,” a Pritzker spokeswoman said.

Licenses, however, can’t be sold until recreational use of marijuana is legalized in Illinois, which shows that the governor will make a big push this session to get a comprehensive legalization measure passed. While Pritzker remains committed to recreational use of marijuana, the exact plan for how to do that — and its timeline — remains unclear. The governor’s office said the state could gain revenue from marijuana business licenses within the upcoming 2019-2020 fiscal year should a legalization bill pass during the spring legislative session. The fiscal year begins July 1 and runs through June 30, 2020.

The governor will deliver his first budget address in Springfield on Wednesday. And Pritzker told the Sun-Times he’ll focus on moving past the “damage” incurred by former Republican Gov. Bruce Rauner.

“There’s a focus here on trying to not only rebuild from the damage that was done over the last four years but also to set us up for growing the economy, which happens in part because of our investments in education,” Pritzker said.

Pritzker’s first budget plan will recommend pumping $375 million more into the school funding formula, which is a $25 million increase over what the state is required to fund. His budget also proposes $21 million in funding in special education grants; $5 million more for career and technical education programs for high school students and $2 million for assistance to help low-income students pay for Advanced Placement testing.

The plan also includes a $100 million increase in the Early Childhood Block grant, an increase of $7 million for early intervention programs and $3.8 million more for a pre-school to age five grant. And it will include $55.2 million in additional funding for public universities; $13.9 million for community colleges and $50 million for MAP grants.

Educational advocates have long said that the state must work its way closer to funding public schools at the 50 percent mark. The state is nowhere near that — last year state funding was at just 24.4 percent — with most funds coming from local sources, including property taxes.

“As you know the evidence-based formula suggests that the state put $350 million more into the formula. We’ve done that and more. I’d like to do more, but of course, we’re in a significant budgetary challenge, in which we need to do the best we can to meet the needs within our revenue,” Pritzker said. “And so we’re pleased with what we were able to do even with this relatively conservative, or austere, budget, particularly in education, where it’ll have the biggest impact on our economy and helping kids succeed.”

And echoing what he said he’d do on the campaign trail, Pritzker said he plans to cut back on a private school scholarship program championed by his Republican predecessor.

“I want to make sure that we are fully funding our public schools before we turn to funding private schools and providing tax credits for wealthy people in the state,” Pritzker said. “So we are cutting back on that program — making sure that we’re providing the tax credit funding for the kids who are already taking advantage of it, but scaling it back so that we’re taking those dollars and applying them to public schools.”

The selling of the James R. Thompson Center will not be in the budget proposal; it had been counted as proposed savings in Rauner’s past budgets. But Pritzker said he wants to sell the building to use it as “an asset to offset liabilities, possibly liabilities in the pension system,” he said. His administration’s plans to deal with an astounding $130 billion in pension debt were detailed by Deputy Gov. Dan Hynes on Thursday in a speech to the City Club of Chicago. It includes borrowing money, deferring scheduled payments, transferring assets and using money from a not-yet-approved graduated income tax.

Pritzker spent his Thursday evening on the Illinois House floor celebrating the passage of a minimum wage hike, which he said will give 1.4 million people in the state a raise. He says the “near-term cost” of the hike — which was decried by Republican lawmakers and most business groups – will be included in his budget. And he plans to sign it prior to his address.

“We have a balanced budget that we are proposing that you’ll see on Wednesday, and that [the hike] is included in the budget. So it’s all paid for within the context of that budget,” Pritzker said. “And we also included tax credits, not just for small businesses but for every organization that has a payroll that will be increasing their payroll because of the raise in the minimum wage. So they are able to take that tax credit.”

Although some groups, including the Civic Committee of the Commercial Club of Chicago have recommended a bump in the income tax rate, Pritzker said the rate won’t be hiked in his budget plan.

“There’s a common recognition and understanding that there is a need for revenue along with bringing efficiency to state government, and I believe that they all advocate an income tax hike,” Pritzker said. “I am advocating a graduated income tax so that it does not hit the middle class or people who are striving to get there but rather leans on people who are post able to pay. And that’s why it’s not in our budget today but I will be asking the Legislature to pass a graduated income tax, and as you know, that could not go into effect until the November 2020 elections.”